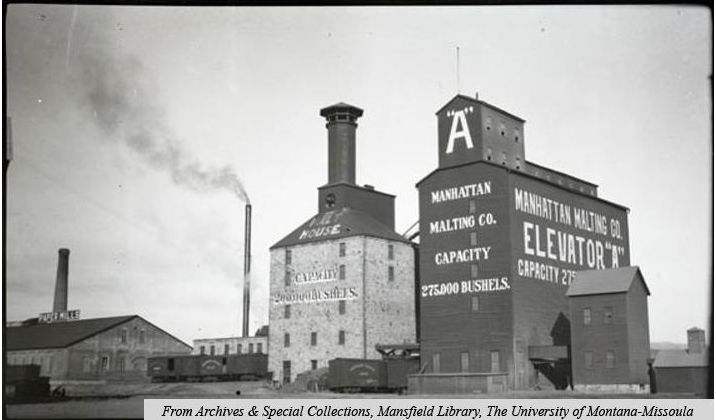 In 1865, what is now Manhattan, Montana was first named “Hamilton, Montana,” established as a rural center for the local community. Then, in 1883, Hamilton was renamed “Moreland” for the Moreland Irrigation Canal.

About this time, while scouting for just the right Manhattan Montana land on which to grow malting barley used in Montana beer making, Henry Altenbrand and several NY businessmen decided in 1890 that the land around Moreland, Montana, 20 miles northwest of Bozeman, would suffice and Moreland was renamed “Manhattan” in that year.

Near the headwaters of the Missouri River, “Manhattan” (latitude 45.86 N, longitude 111.33 W, elevation, 4,243 feet), became the center of operations for Altenbrand and Company.

Montana, A Top US Barley Producer

The town of Manhattan, 10 miles west of Belgrade, MT and 12 miles east of Three Forks, MT, was platted with the malting industry in mind for beer production and included grain elevators and a malting house.

Though some malt stayed in Montana for local brewers, most of Manhattan’s malt was sent to the U.S. east coast by train.

Labor for Manhattan Montana’s barley and irrigation operation’s mostly hailed from the Netherlands, and by 1893 a sufficient supply of Dutch had settled in the region to sustain this new, water intensive industry.

The labor for the barley and irrigation operations mostly came from the Netherlands and by 1893 a sufficient supply of Dutch had settled in this region of southwest Montana to sustain this new, water intensive industry.

With the creation of a Montana railroad spur and an overflow of Dutch settlers in Manhattan, the town of Amsterdam, Montana, also mostly composed of Dutch settlers, formed in 1911 with many settling on the rolling hills a few miles to the south.

To this day, Amsterdam, MT has never been incorporated and, thus, still receives its mail via the Manhattan, Montana zip code 59741, as does Churchill, MT. In 1950 seed potato farming began and in the ensuing years it has grown to be recognized as one of Manhattan’s major agricultural products.