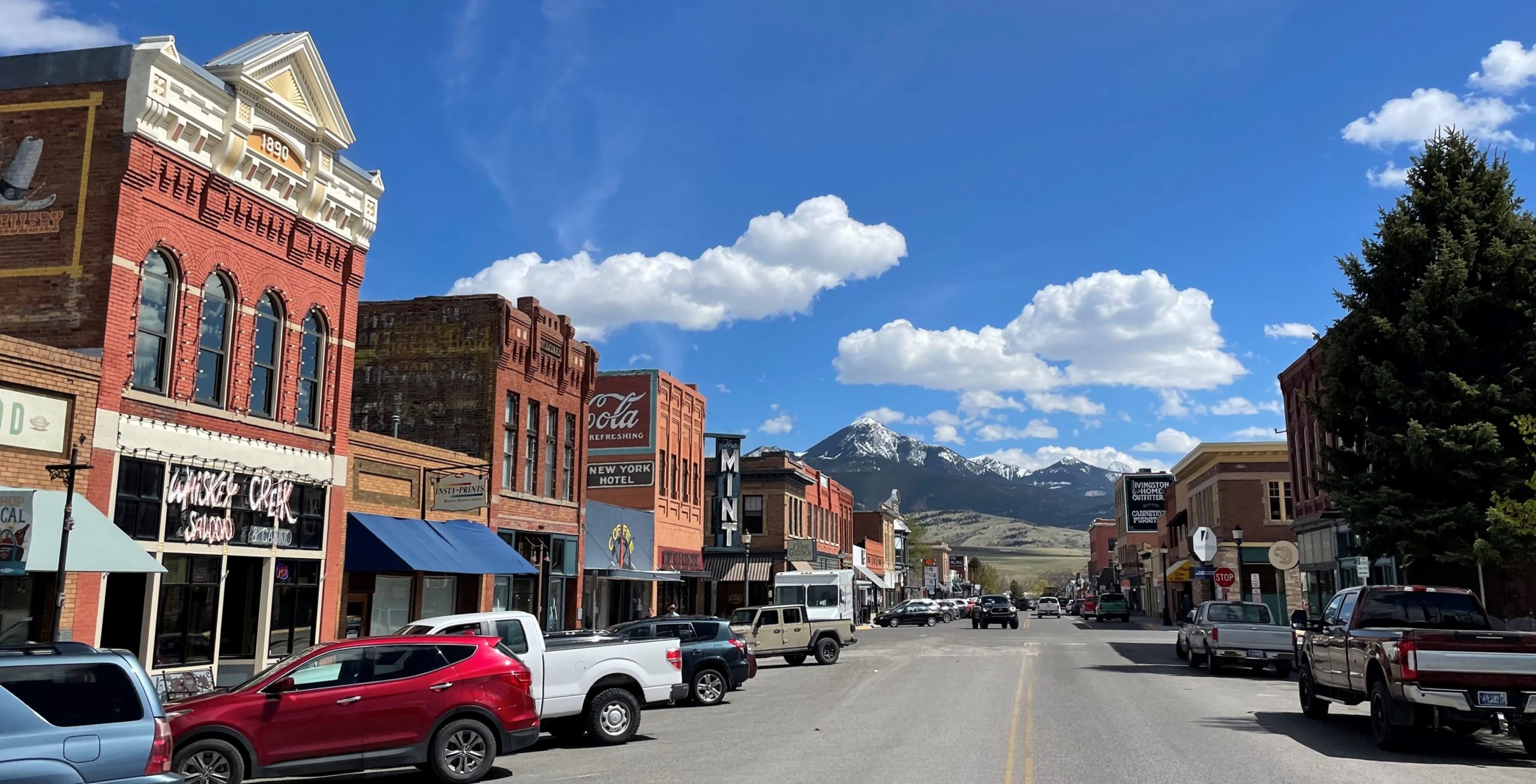 Between the Gallatin and Crazy Mountain Ranges and abutting the Absaroka-Beartooth Wilderness, Livingston, Montana (Latitude, 45.66 N, Longitude, 110.56 W, Elevation. 4503 feet) is nestled along the free-flowing, Yellowstone River, one of the world’s longest, undammed rivers.

For centuries, this region, which includes the extraordinary Absaroka Mountains, was sacred and neutral to the Blackfeet, Flathead, Shoshone, and “Crow,” which is a misinterpretation of the word “Absaroka.”

Due to abundant flora-fauna, Montana’s Paradise Valley was named “The Valley of Flowers” and was a common hunting ground for all these tribes.

Originally occupied for thousands of years by the aforementioned tribes and other Native American people before them, the stunning Absaroka Mountains, as previously mentioned, were named after the Absaroka Indians (aka the “Crow.”)

These tribes were here long before the future Territory of Montana was acquired in the 1803 Louisiana Purchase, brokered by Thomas Jefferson, the U.S. Congress, and Napoleon Bonaparte.

Captain William Clark’s expedition brought some of the first white men to travel through this area. Along with his men and Sacajawea, Clark stopped here somewhere near here along the Yellowstone River to rest and eat on July 15, 1806.

In 1864, after the discovery of gold, mines at Emigrant Gulch, Bear Gulch (later known as Jardine) and Cooke City went into production.

Coal was also discovered on the west side of the Yellowstone River above Clark City, now known as Livingston. After the establishment of the railroad, mines at Horr, Trail Creek and Cokedale were developed.

Clark City, Montana boasted a population of 500 with six general stores, two hotels and 44 other Park County, Montana commercial businesses, 30 of which were saloons.

Soon traders, trappers and miners flocked to the area and established a small settlement on the river called Benson’s Landing.

Then came the great “iron horse” and in the early 1880’s the Northern Pacific Railroad sent Joseph McBride to find property on which to build a store for Bruns and Kruntz that would supply railroad workers.

He chose the site of present day Livingston, by-passing Benson’s Landing just a few miles down the Yellowstone.

Railroad officials, however, surveyed the area and decided the city should be located farther north where the Northern Pacific RR officials had previously chosen a spot, ironically, also naming it, “Livingston.” People and businesses then moved to this second spot, today’s Livingston.

The original city, simply a tent town of railroad men, was called Clark City, for railroader, Herman Clark. But by 1882 Livingston, MT had been named after pioneer director of the Northern Pacific Railroad, Johnston Livingston.

Soon, the town was a base camp with shops–tents and cabins–housing many businesses.

Livingston, Montana history played out near the banks of the Yellowstone River

At one time, up to 2,200 railroad men were based in Livingston.

Park County, Montana, home to Livingston, grew out of the needs of the railroad. The branch line south to Yellowstone carried countless tourists throughout the years and provided local residents transportation to and from their farms and ranches.

To the north, the Shields Railroad Branch Line helped create the towns of Wilsall and Clyde Park, and each year in the fall that same line carried the farmers’ wheat and ranchers’ livestock to market.

Stock raising and agriculture began in the early 1880’s. Wool shipment was big business and the sheep industry flourished. Cattle soon followed as large herds were driven in from the south.

Shortly after the turn of the century grain crops followed, and a major economic force in Park County was firmly established here where the Montana farm and ranch real estate was plentiful and soil rich. The completion of the Park Branch of the Northern Pacific Railroad brought to Livingston the commercial trade business of tourists and suppliers.

Once the steel rail was laid across the area’s vast expanse of land, more people came through the county and through the Paradise Valley to see the splendors of the nation’s first national park, Yellowstone National Park, established by the US Congress and signed into existence by President Grant in March 1, 1872.

Tourists came aboard the Northern Pacific’s North Coast Limited and changed trains in Livingston to board the Park Branch Line for the recreational trip to Yellowstone Park’s main entrance at Gardiner, which remains open year-round.

With the West not yet completely civilized and characters like Calamity Jane in town, there was plenty of excitement in Livingston. By the time 1902 arrived, the Northern Pacific opened its third and most prestigious depot in town–the largest depot west of the Mississippi River at that time. Livingston, Montana soon became known across the country as “the gateway to Yellowstone National Park.”

Main Street Livingston, MT and the historic districts are reminders of the city’s bygone golden era. The downtown buildings from the 1880s and 90s remain as a testimony of the old west and give Livingston its special turn-of-the-century charm.

Because of its historic flavor and beautiful natural surroundings, Livingston has also been found by Hollywood; several movies, including the very popular A River Runs Through It have been filmed in the area.

Livingston, MT has much to offer locals and tourists alike. Located on blue ribbon fishing waters of the legendary Yellowstone River, Livingston is home to the International Federation of Fly Fishers.

Stop by their Discovery Center and learn what fly fishing is all about. If you are interested in Montana hunting and fishing, the area abounds with guides and outfitters to assist all types of Montana sportsmen.

Over the decades, Livingston, MT has become an arts Mecca with many artists and writers living in the area’s inexpensive homes and working at downtown commercial property. Downtown has over 15 art galleries, and over 200 artisans live and work throughout Park County.

From June through September, the Livingston Gallery Association presents the Downtown Art Walk every fourth Friday of the month. In late summer, the Park County Studio 2-Day Tour allows art lovers to see artists working in their own studios.

The Livingston, Montana Area offers live theater at The Blue Slipper Theatre and the Firehouse 5 Playhouse. Movie goers will enjoy The Empire Theater with its art deco motif. History lovers can delve into Park County history at the Yellowstone Gateway Museum. Railroad buffs and enthusiasts must make a stop at the Livingston Depot Center.

Kids of all ages are welcome to view the three-room Livingston Model Railroaders display also at the depot. Travelers will peruse unique shops and tempt their pallets at excellent restaurants throughout the area.

For recreational adventure, Yellowstone River whitewater rafting is very popular. The area has plenty of trails to hike, bike, bird watch, and horseback ride on, and places to hunt, fish, golf, ski, rock climb, and camp. For a western-life recreational experience, there are working Montana ranch properties in the area willing to break a tenderfoot.

Ranked as the nation’s tenth top rodeo during the Independence Holiday, the Livingston Roundup is held every year July 2-3-4 and draws competitors and visitors from all over the USA and Canada. Before the rodeo, don’t miss the big July 2nd parade downtown Livingston. Also in July, enjoy the music-filled Summerfest, the Kids’ Trout Derby, the Festival of the Arts, and the CNR Sustainability Fair.

Take the family for a soak, 25 miles south of town, in the beautiful Paradise Valley, MT or visit the historic and romantic Chico Hot Springs, where Hollywood actors have been spotted.

And, if you’re missing small city life, travel I-90 25 miles west to Bozeman, home of Montana State University, the Museum of the Rockies, the American Computer and Robotics Museum, and many more exciting things to see and do.